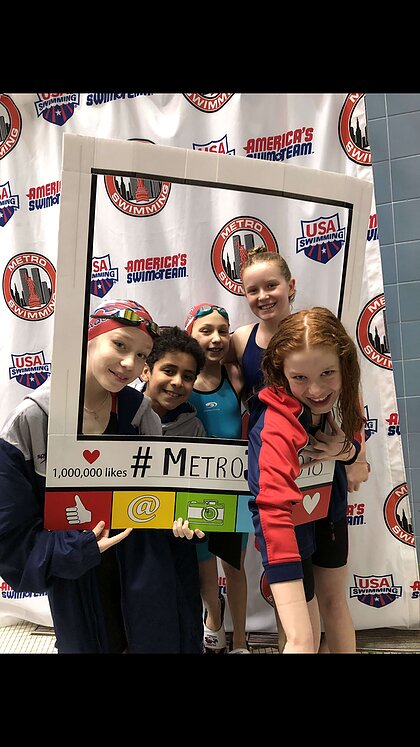 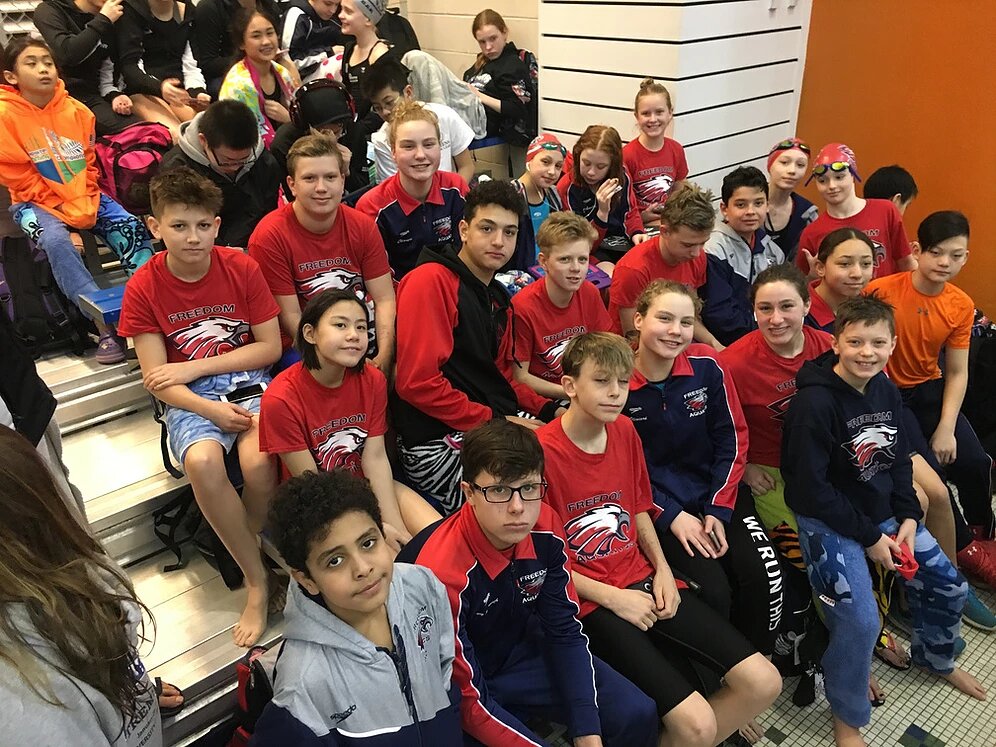 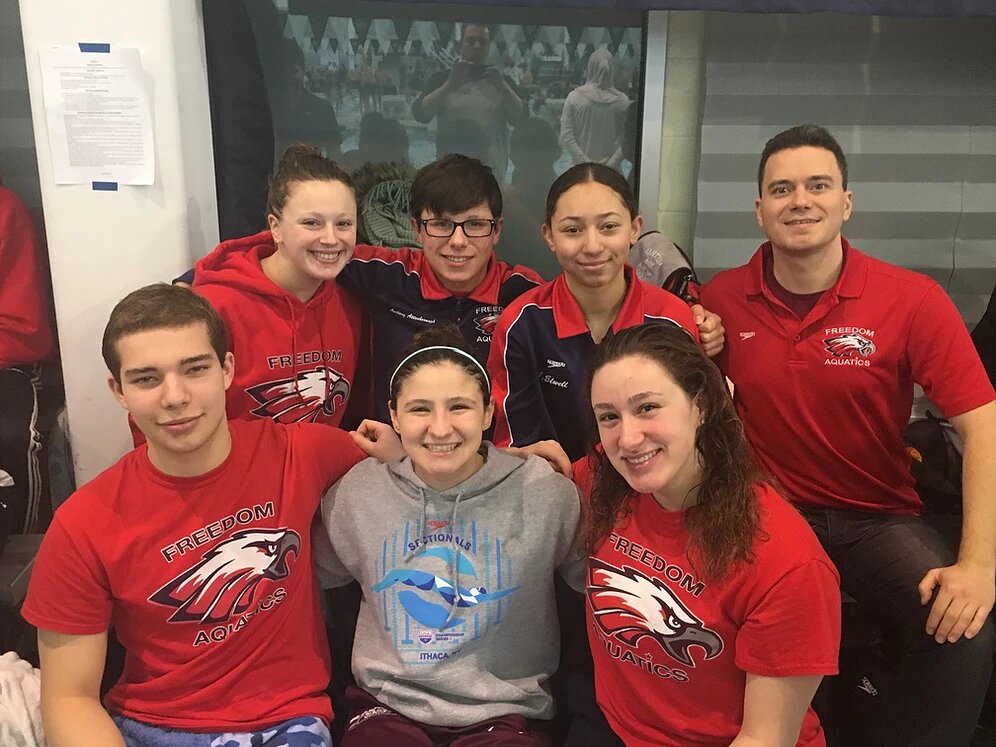 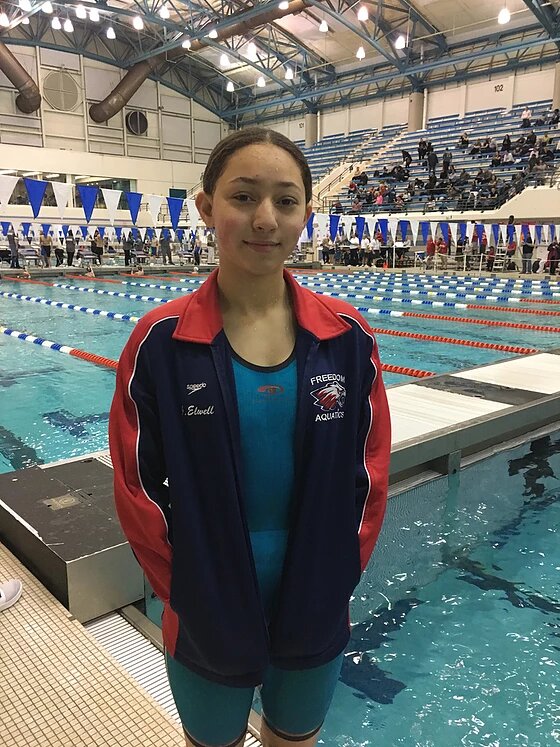 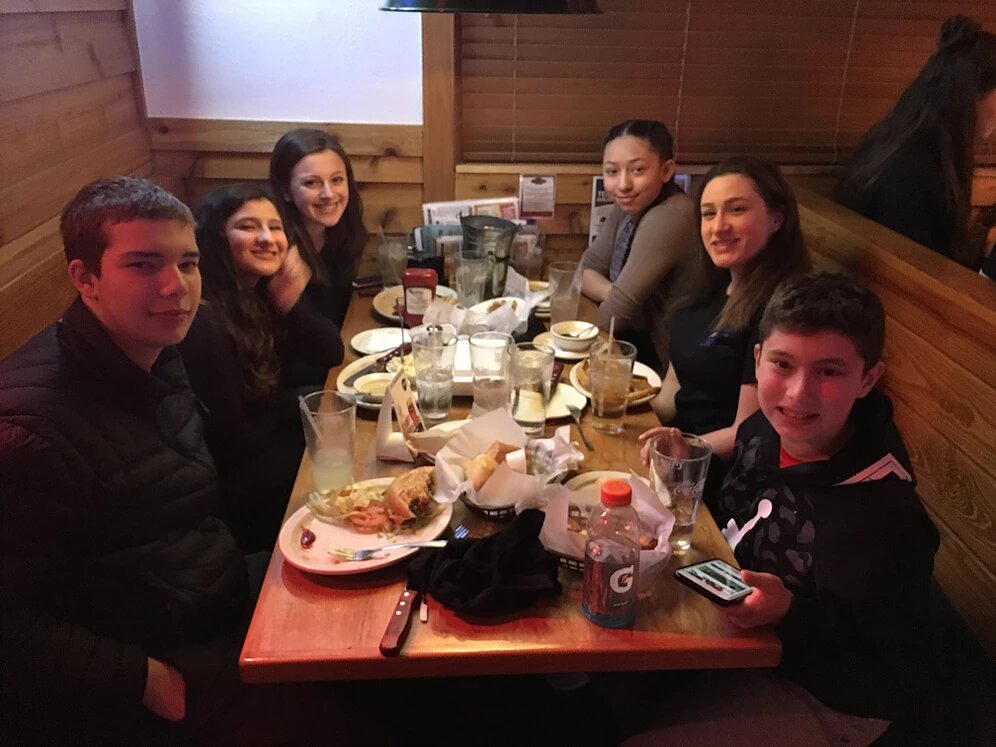 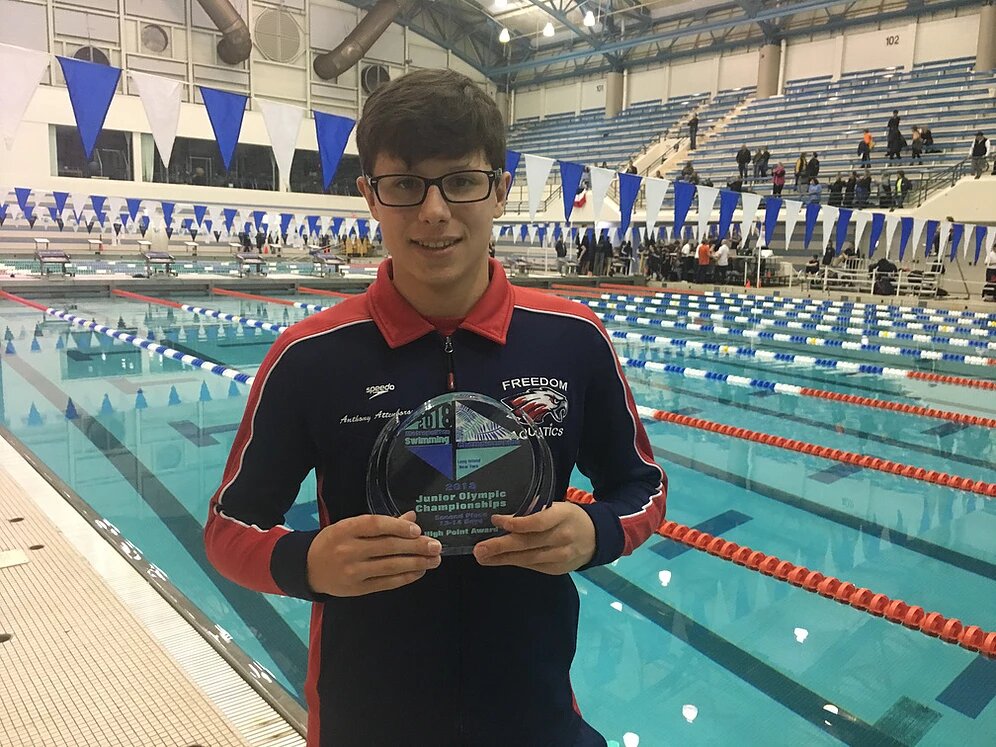 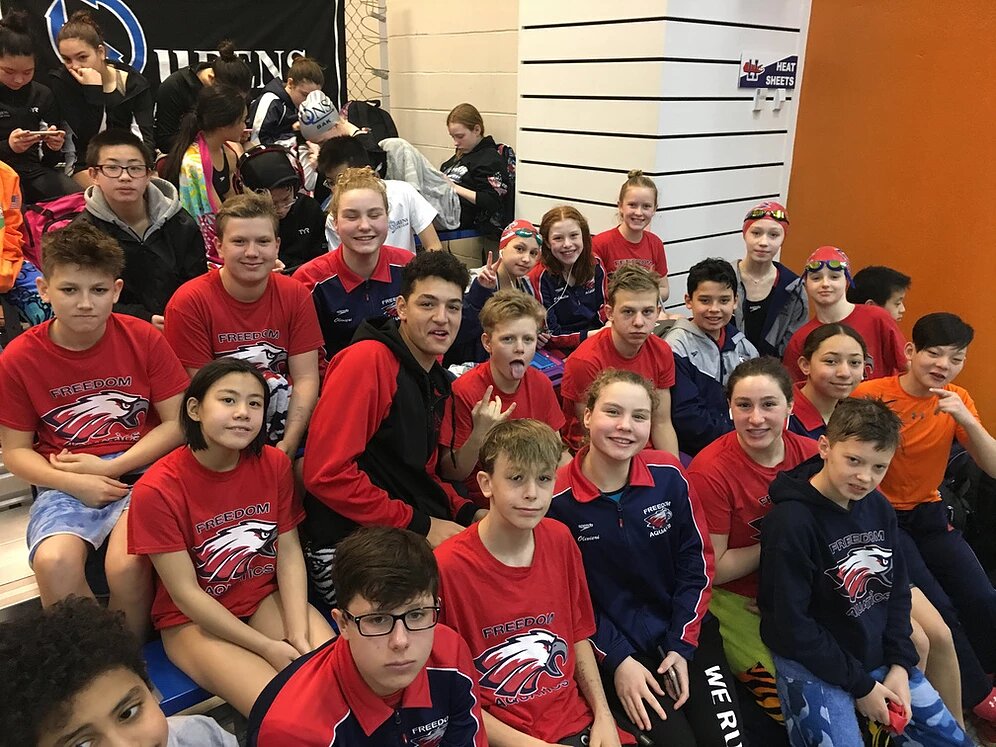 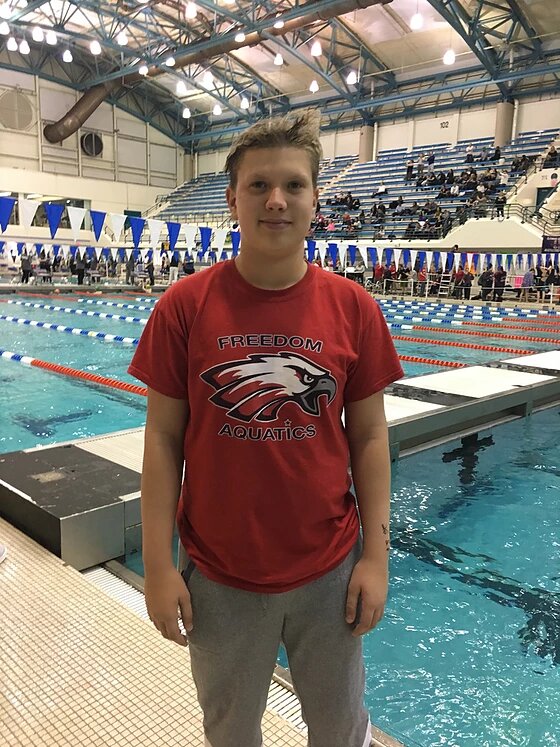 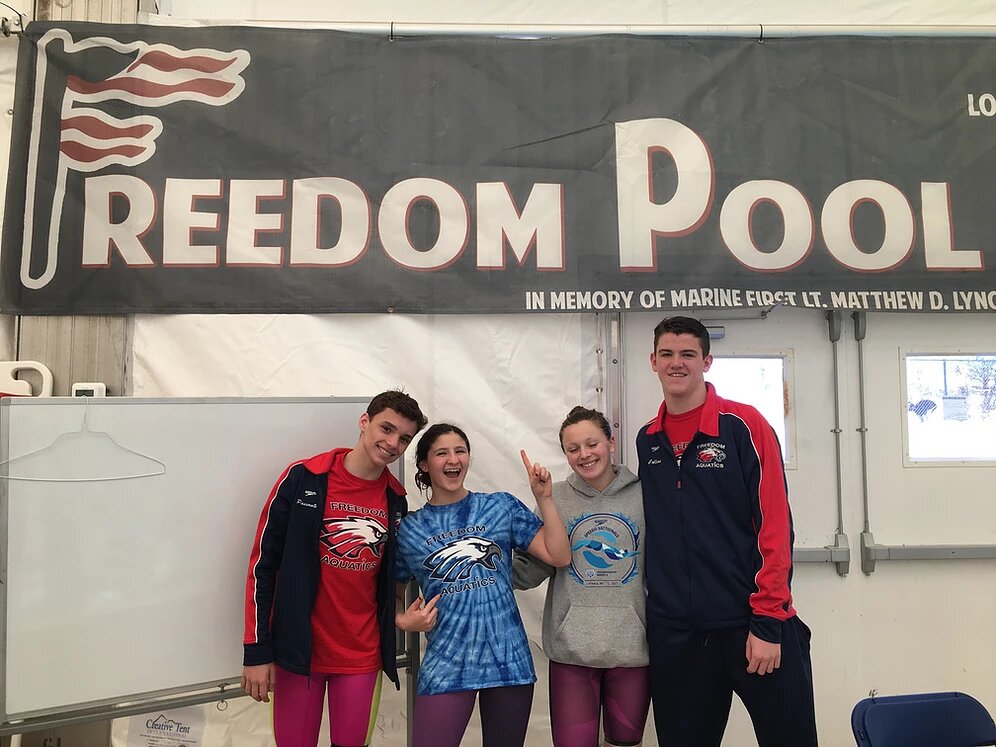 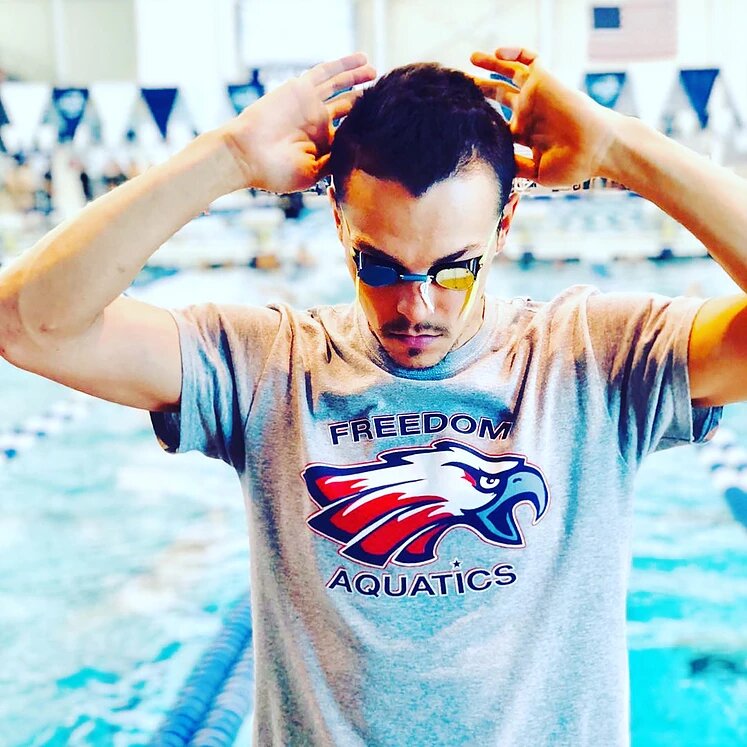 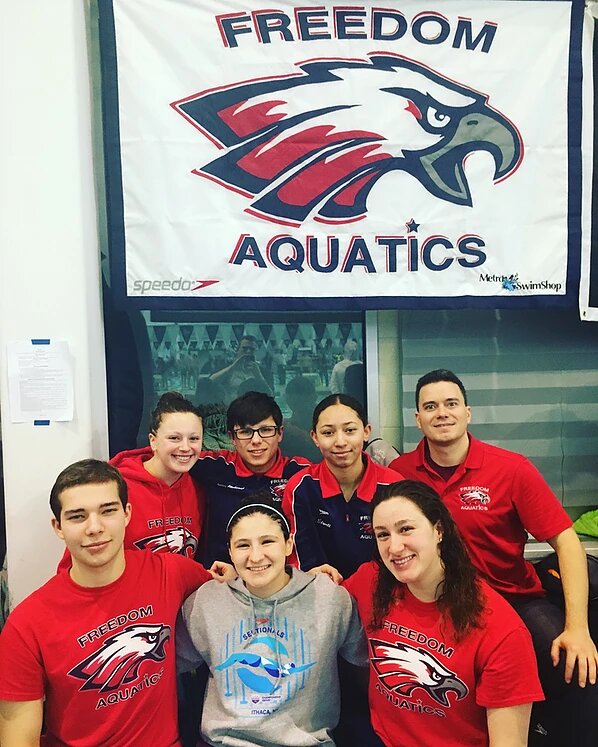 The month started with the 8 and Under championships. The inclement weather played havoc with the schedule, forcing event organizers to move the traditional swimmer parade. The youngest Freedom Aquatics swimmers nevertheless had a successful meet. 15 of Freedom’s 8 and under swimmers participated in the meet. Chantal Yildiz had an outstanding meet, placing 6th or higher in every one of her 6 events and taking 1st place in 25 Yard Breaststroke. Rafael Tkach and Matthew Temni also had great performances, placing 16th place or higher in 5 of their events. Michael Attenborough is following in the footsteps of his brother, placing 9th and 11th in the 25 and 50 yard breaststroke.

The following weekend, Freedom Aquatics Swimmers competed at Junior Olympics and Age Group Championships at the Eisenhower Park Swim Center on Long Island. The meet, showcasing some of the best swimmers in the area, included 16 Freedom Swimmers qualifying for Junior Olympics, with 4 more swimmers qualifying for Age Group championships. Anthony Attenborough lead all Freedom swimmers with 121 points, finishing first in 200 Breast and 400IM, and 2nd in 1650 and 200 Free. He also had a number of 3rd and 4th place finishes. Josephine Elwell qualified for Finals in all her Freestyle events placing 13th in the 100 Free, 14th in the 200 Free and 11th in the 50 Free event. The 10 and under Girls and Boys relay teams of Theodora D’Amelio, Madison Meccia, Pelagia Chazov, Imogen Miller, Emma Bolino, Andrew Krivenko, Omar Mohammed, Dillon Singer and Winston Kan had top 15 finishes in their races. Theodora D’Amelio finished 8th in the 50 Free. Andrew Krivenko placed 12th in 100 Back, 16th in 100 Free, 13th in 100 IM, 13th in 50 Back and 15th in 50 Breastroke. Omar Mohamed placed 16th in 50 Breaststroke. Maxim Reznik made his first ever meet final in the 50 and 200 yard Breast and placed 14th in Finals in both events. 11-12 Boys 200 Medley Relay team of Hudson Pepper, Maxim Reznik, Eyton Ng and Michael Tayban placed 9th. 13-14 Girls 200 Medley Relay Team of Olivia Olivieri, Ava Nobile, Sophia Olivieri and Josephine Elwell finished 16th.

Finishing up the month, the team split into two groups, we had Senior swimmers going up to Ithaca to participate in the Eastern Zone Speedo Sectionals, and a large group of swimmers participated for the first time at the Bronze championships at the Mark Twain pool in Yonkers. At the bronze championships, Yannis Khudaynatov lead all Freedom swimmers with 137 points, followed by Daniel Belyaev with 88, and Chris Sapara and Russell Geller with 87. Many swimmers made silver cuts at the meet including Pelagia Chazov in 100 Fly and William Kwan in 200 Fly. Numerous swimmers placed in the top-16 in each age category while swimming their season best times.

7 swimmers went to Eastern Zones Championships in Ithaca where 5 of them – Anthony Attenborough, Oleksandr Bezuglyy, Danielle Cianciotto, Maxim Kleyer and Elena Uttaro qualified in individual events with Ava Nobile and Josephine Elwell leading 4 relay events. The Sectionals meet was highlighted with the successful performance of Oleksandr Bezuglyy placing 8th in 100 Breastroke and 4th in the 400 IM. Anthony Attenborough qualified for finals for the first time in 200 Breaststroke.

Looking ahead, we’ll be beginning the grueling long-course season with some of the meets already on the schedule.

We look forward to seeing all the swimmers and their families at the Team Dinner on April 18th, to celebrate our achievements over this short course season! 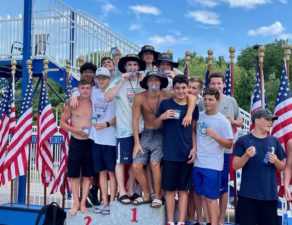 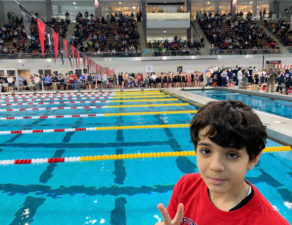 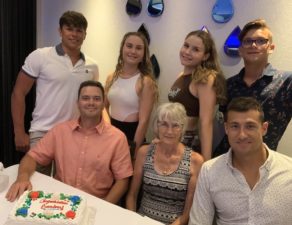 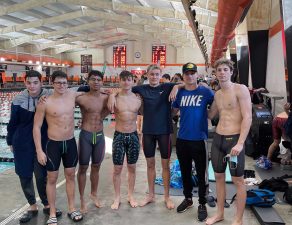 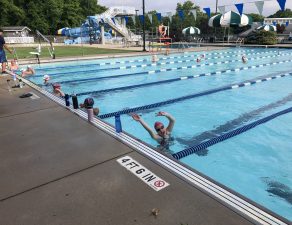